Of the 17 films nominated for major awards (Best Picture, Director, all four acting, and two screenplays), I have yet to see four. Time just caught up with me, but I’ll see them eventually. Regardless, I have ranked the films in each category by my favorite to least favorite. Nominees I haven’t seen have been marked with an asterisk.

These are by no means my official betting picks. However, they come close. That post will come later.

END_OF_DOCUMENT_TOKEN_TO_BE_REPLACED 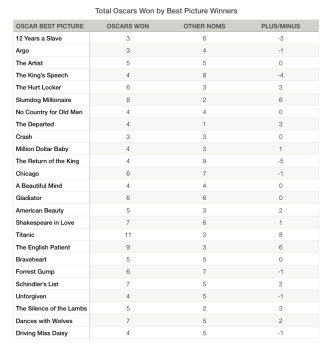 There are a lot of arbitrary lists out there giving a ‘definitive’ ranking of the best, and even worst, Best Picture winners. Some of these boil down strictly to preference. A lot take a look at the dominant field they won against. For instance, there was a big hoopla over Crash winning the Oscar in 2005 over the heavily favorited Brokeback Mountain. Especially considering it wasn’t even nominated for a Golden Globe. Then there was Shakespeare in Love‘s win over Saving Private Ryan. How could that be possible? Then there are lists that just say a year was weak and a subpar film had to walk away with the award.

I made a series of charts looking at the past twenty five Best Picture winners. The charts include the total awards they won, including Best Picture, and how many more they were nominated for. You’ll notice the most nominations and most wins both belong to Titanic with fourteen total nominations and eleven wins. In theory Titanic could be considered the best Best Picture winner. Then there are films like The Silence of the Lambs which had seven nominations with only seven wins, but those five wins are the major five awards that only two other films swept as well (both prior to my twenty five year cut off). Maybe that’s the best Best Picture.

Anyway, like I said: these lists are arbitrary, but you can take a look at the stats and decide if any of this is even worth exploring.

There’s a lot to be said about the precursors to the Academy Awards. The Golden Globes are fun with a lot of glitz and glamour, but often don’t tip off who would get the Oscar a month later all too well. The Screen Actors Guild and, to a certain extent, the Producers Guild of America Awards tend to be a good indicator of the acting categories and even Best Picture award at the Oscars.

So, let’s take a look at what this weekend’s wins statistically tell us. First, the Oscar nominees for Best Picture and all four acting categories.

END_OF_DOCUMENT_TOKEN_TO_BE_REPLACED

Meant to post this right after the Oscar nominees were announced, but I got tied up and forgot to upload it.

The SAG Awards are a terrific predictor for the Academy Awards. Unlike the Golden Globes, this ceremony doesn’t break up the film categories into drama and musical/comedy. There are five nominees in each category (occasionally six on a rare occurrence). While there is no “best film” there is a Best Ensemble category, which can help as a predictor for the Best Picture Oscar.

The SAGs air Sunday January 25 on both TNT and TBS.

END_OF_DOCUMENT_TOKEN_TO_BE_REPLACED

Tomorrow I’ll be posting my predictions for the Screen Actors’ Guild Awards, which is a big indicator for the Oscars. But today I’ll look at who was nominated and give my immediate, brief reactions. There were a few surprises, and a quite a bit of obvious choices.

The Grand Budapest (somewhat surprisingly) and Birdman (not so surprisingly) came away with the most nominations with nine each. Close behind was The Imitation Game with eight. At first I was shocked that Boyhood only came away with six nods, but then I realized that it was nominated for all of the major awards it was predicted to get nods in (film, director, both supporting roles, screenplay) and then got a final one in film editing, which I don’t predict.

END_OF_DOCUMENT_TOKEN_TO_BE_REPLACED

Here are my predictions for the 72nd Golden Globes. They air this Sunday (January 11) on NBC. Tina Fey and Amy Poehler host.

END_OF_DOCUMENT_TOKEN_TO_BE_REPLACED

I’ll keep this short and sweet. Here are ten films I dug this year, in alphabetical order, and why I like them. I’m giving myself a tweet (140 characters) to explain why I like each release.

END_OF_DOCUMENT_TOKEN_TO_BE_REPLACED

The Skeleton Twins wasn’t the best film I’ve seen this year, but it may be tied for the most influencing (Boyhood being the other). I jokingly said that I was about to watch the Adam and Ashley Story, joking that the two leads mirror the lives that my sister and I are currently in the middle of navigating. Take away a few plot points and get right down to the thematic basis for the characters and that’s what I mean.

END_OF_DOCUMENT_TOKEN_TO_BE_REPLACED

Two of the most influential roles I have ever watched both belong to Robin Williams. Sure, I first met him as the voice of Genie in Aladdin and he was my hero as Peter Pan in Hook, but I’m talking about two of his most serious roles.

In 1989, the year I was born, a film about a teacher who taught his students to seize the day was released. It would be over a decade until I saw it. Early in my college career, when I first decided to become a teacher, I saw it because of another film role of Williams that I’ll talk about in a few words. I knew what teacher I wanted to be when I finally saw Williams as John Keating. I wanted to teach literature and writing, but I wanted to inspire my students to live and be good humans. Every Friday I remind my 11th and 12th grade students to make good decisions. Whatever they decide, I hope they look back and say that they did good. They are at a transition in their life and one they I want them to look back and of course say that they did well in school and were successful. But more importantly I want them to have done some good as well. Good for themselves and good for society.

Earlier this year, a girl in my first hour asked me if I had seen Dead Poets Society. In a sarcastic was I respond like I normally do when I assume everyone should have seen a film or read a book or even had a certain food: “Of course. I’m human.” She laughed, but then got a little more serious.

“You remind me of that teacher in it.”

I sincerely thanked her and told her that character influenced how I talked and treated students. Sometimes I know I don’t hold up to those standards and admit that I have not had such an impact on my students as John Keating had in Dead Poets Society. But I do hope that I have had some impact on them.

The other role Williams acted in that I consider one of my favorites is as Dr. Sean Maguire in Good Will Hunting. I saw this early in my “critically acclaimed only” snob phase. Of course I’m glad I did see it. The film taught me a lot about life. It reminded me to never be okay with anything. It taught me to strive every day. I’m not saying I did that, but I’m saying I know I should have. The character is very similar to John Keating. He’s comforting and guiding while being genuine and witty.

If Keating was who I want to be now, Maguire is who I want to be years from now. Hardened by loss, but not defeated. A disdain for giving up, but never disappointed in those who try and fail. Having so much sympathy, but never apathy. I want my students to understand that caring is ‘cool’ and that they will never look back and say that they cared too much, but will look back and wish they weren’t so nonchalant with so many aspects of life.

In short, I am deeply saddened by the loss of Robin Williams. His death will be talked heavily about in the next few days. I am not going to go into mental health and depression now. I just wanted to have a place where I reminded myself of an actor who did what all actors want: leave an emotional connection through his craft.

Robin Williams will always stay with me. No matter what.

Marvel films aren’t the best superhero films, and sometimes they’re not even the most entertaining superhero films. But there is a certain aura around them that makes them appeal to the masses. Fanboys get the inside jokes and obscure references to comics that the average viewer might not pick up on; however, they generally are likable enough for the masses to enjoy.

Guardians of the Galaxy had a lot of hype leading up to it. Chris Pratt is an extremely nice, funny guy who kills it as Andy on Parks and Recreation, but there was concern about how he’d do as a lead in a Marvel film. The good news is, that this isn’t a typical Marvel film. (In certain regards.) It’s has a witty comedic undertone that Iron Man tries to have, but has to pull away from because he is the central Avenger. Guardians is filled with losers from the galaxy who will never really save Earth. In fact, aside from the opening scene, Earth isn’t really mentioned all that much.

Pratt does an amazing job on his own, and if one thing lacks, it’s the emotional backgrounds given to the characters, including his leading Peter Quill. We’re told, but barely showed, why we should care about these losers becoming winners. A few loved ones died and a raccoon was genetically modified. It takes it away from being a great film, but your average viewer who is in it for graphics and action won’t notice, or care if they do notice.

What Guardians does right is that it doesn’t try to fit into the Marvel Cinematic Universe too much. It is its own entity that feels more like Star Wars than it does Avengers. It’s a ragtag bunch of aliens trying to do some good in outer space. It doesn’t even feel like Thor, which has become problematic because the Norse god is involved heavily with humans. It definitely is splitting hairs calling this a space opera and not a superhero film, but that’s what it is.

What works in the film is especially the interaction between the group. It helps carry the film when plot holes pop up (like why doesn’t Groot come help Drax at one point midway through the film?). One of the highlights of the film centers on a prison break where the quartet show off all of their skills. It is a turning point in the film that really showcases how the group can work together.

If you’re a diehard Marvel film fan, this one will jump to the top of your favorites list. If you’re wishy-washy about superhero films, this one should definitely be a good one for you to try and like them again.