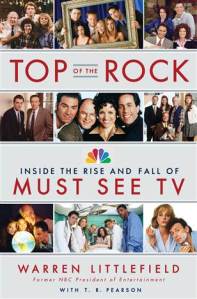 Oral histories aren’t something I necessarily go looking for when I want a definitive account of a piece of history. While I originally expected former NBC President Warren Littlefield’s Top of the Rock: Inside the Rise and Fall of Must See TV to be a straightforward narrative with some personal splash, I quickly realized this was indeed an oral recollection from several key players of the most influential period of recent television.

It has all of the names you’d expect, but is missing a few names I’d like to hear from (only half of the cast of Friends – Lisa Kudrow, Matt Le Blanc and David Schwimmer – gave interviews from the book). The book focused heavily on legendary director Jim Burrows (who directed nearly every episode of Cheers and countless other pilots for successful NBC shows, which you will receive a full account of in the book.

One problem I suppose I should address now is that while the beginning of the book gives a roster of who was interviewed (talent, creative and executive) it is hard to remember exactly who everyone is by the time their name comes up for the first time halfway through the book. I understand this was done for formatting reasons, but it would have been great to have a “player’s guide” prior to each chapter for only those who are relevant to that specific section.

Other than that little particular annoyance, which truly didn’t hinder the enjoyment of the book, I felt that the entire history read quickly and painlessly. Each chapter focused mainly on a specific show with interjections of various pieces of information that are somewhat important to the show, but needed to be explained to give a broader view of the time period.

I’ve read a number of reviews that the book confused readers because it wasn’t entirely a linear story. For instance, the two chapters dedicated to ER go through the entire timeline of the medical drama then later Will & Grace gets its own section. I guess people assumed the book would go from year to year and touch upon each show that was relevant that year. Instead, you need to go into this book thinking each chapter is going to be its own story. The only show that gets a chapter to itself later on is Seinfeld, which openly discussed Jerry Seinfeld’s decision to end the show and how that may have inadvertently opened the door for Littlefield’s firing.

Upon finishing the book I realized what I most want to read is Jim Burrows personal memoirs (I knew he was influential before reading this, but after I realized he is probably the most influential name in television history), in depth narratives behind each show. This could be a launching point of a non-fiction series delving into NBC in the 1980s and ‘90s.

In the end I guess you could say this was a written version of E’s True Hollywood Story, which is fine. It entertained and informed, but it left me wanting more in the end. Not in a way that this book didn’t live up to expectations, but more in a way that it wet my palette and I’m starving for more.

8.5/10, for quenching my thirst, but making me realize I wanted more.