Sorry that this second batch of episodes from season two took so long (to the five of you who love Gilmore Girls). This group of episodes is most certainly worth the wait. It is filled with ridiculous themed episodes (an Olde English-style dinner, a basket auction) some weighty-ish episodes (like Richard coming to Stars Hallow) and some great love triangle development between Dean and Rory and Jess. 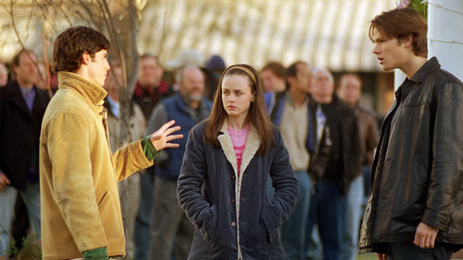 Where to begin though? Let me knock a few small things out of the way. That “Bracebridge Dinner” was one of my favorite WTF moments in the history of television. It was like an out of body experience watching so charmingly absurd. It really deserves to be watched just for the sake of watching it.

Also, I’m extremely glad they brought in Jess when they did for numerous reasons, but the main reason was that he replaced Tristan, who was growing tired already. There needed to be a love triangle, I admit (and will delve into in a second) but Tristan sucked. Chad Michael Murray was landed a reoccurring role on Dawson’s Creek anyway, so timing worked out. The Shakespeare episode just made it very apparent how much Tristan’s bad boy image didn’t work on the show and he was just annoying. So bring in another.

Jess is the bad boy with some heart. And it works.

Even I’m falling for Jess a little bit. Let’s just go through my favorite Rory/Jess moments.

It starts when he sits with her in the horse-drawn carriage when she is by herself because Dean went with his little sister. Then there are all of the little moments that are related to literature, a connection that Rory and Dean don’t have. He also pulls a sweetheart move when Rory is embarrassed about accidentally censoring the video store and he alludes to doing something along with his hoodlum ways.

Of course it all boils over when Jess outbids Dean for Rory’s basket in “A-Tisket, A -Tasket.” While on the basket date she ends up losing her bracelet that Dean gave her. Jess sees it instantly, but doesn’t tell Rory about it. The missing bracelet goes unnoticed until two episodes later in “Lost and Found” when Dean notices. After suspicious circumstances Lorelai accuses Jess of stealing the bracelet to hurt Dean, but really hurt Rory. Jess makes a point saying it obviously wasn’t that important to her because she didn’t notice it for weeks.

In other big news: Jackson proposes to Sookie. Lane gets screwed over by her mom (again). However Mrs. Kim discovers Lane’s boo was Korean so all is a-ok. Christopher comes to town which makes Lorelai realize she hasn’t been happy for 15 years because she always had him in the back of the mind. Also, Luke bought the flower shop next to the diner to expand said diner as well as his apartment upstairs.