This new season if Gilmore Girls finally sees Lorelai and Luke together. The sexual tension has built for four years, but that doesn’t mean the relationship has diminished the quality of the show. Throughout the first couple episodes of the season, the new couple is kept apart because Luke had to go with his sister and brother-in-law to help with the Renaissance festival circuit. The distance allows fans to see the two as a couple without seeing the two as a couple. Anticipation grew until the two finally went out on a date in the third episode.

Seeing the townsfolk get upset over the relationship was an interesting wrinkle. Apparently, two shop owners have previously gotten together and it ended in a hot mess. Taylor rallies up Stars Hallow to convince them Lorelai and Luke are headed towards disaster.

A lot of their relationship is typical television garb. Again, that’s not a bad thing. We knew R ichard and Emily would have a problem with the couple, but it is interesting to see the two parents take meddling to a whole new level. Because the Gilmores are separated for the moment, they each have to attack Luke in their own, cruel way. First, Emily insists on dinner with Lorelai and Luke and indirectly insults Luke every step of the way. She’s a mastermind, and now we get to see it. Then Richard takes Luke golfing. Luke doesn’t golf. The entire time is spent on Richard convincing Luke to franchise his diner, so that if their relationship lasts, at least the blue collar worker will be somewhat respectable.

On the other hand, Rory and Dean are back together. The long distance thing isn’t really working though. Especially considering Dean left his wife for her, and a lot of Stars Hallow residents are pretty bitter about that. Pretty dramatic stuff. Even Luke isn’t happy with Dean at the moment; this is a huge departure from how much he loved him in the past.

Things get murkier when Logan, a swarmy, rich kid is introduced into Rory’s life. His father is a newspaper magnet and Logan “works” at the Yale newspaper. He’s also a member of the Life and Death Brigade – an ultra-secret club that nobody really knows about. There’s an entire episode dedicated to Rory writing about it and getting invited to a weekend soiree. It introduces a major theme: is Rory too safe? Logan definitely pushes her boundaries, much like Jess, but seems safe enough, much like Dean. 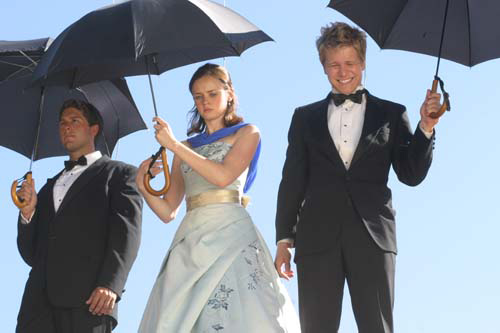 In the final episode of this batch Emily and Richard throw a party for Rory, unbeknownst to her, to help Rory find a suitable boy because they aren’t a fan of Dean. Rory bumps into Logan and some Brigade members and they all have a gay old time. However, Rory forgot that she was supposed  to slip away early for a date with Dean. Once he sees her come out tipsy, and late, he realizes he will never be a part of her world and breaks up with her.

She’s heartbroken, but the episode ends with her being dropped off by Logan and the Brigade, drunkenly walking into her childhood home as Lorelai looks on. Clearly her mother knows her little Rory is finding her place in the Yale world.

Some notes on minor characters:

Paris has been reduced to a caricature of herself yet again and is barely in the show. Lane started dating her bandmate/housemate Zack. Christopher popped back up again and his wife left him and his baby to fend for themselves. Sookie is preggers. Again. Oh, and Jackson dethroned Taylor as town selectman.

We’ve focused heavily on the Girls so far this season, and its a little upsetting because last season did a good job of making the show pretty well-rounded. Then again, the show is about them. So, no major complaints.