Marvel films aren’t the best superhero films, and sometimes they’re not even the most entertaining superhero films. But there is a certain aura around them that makes them appeal to the masses. Fanboys get the inside jokes and obscure references to comics that the average viewer might not pick up on; however, they generally are likable enough for the masses to enjoy. 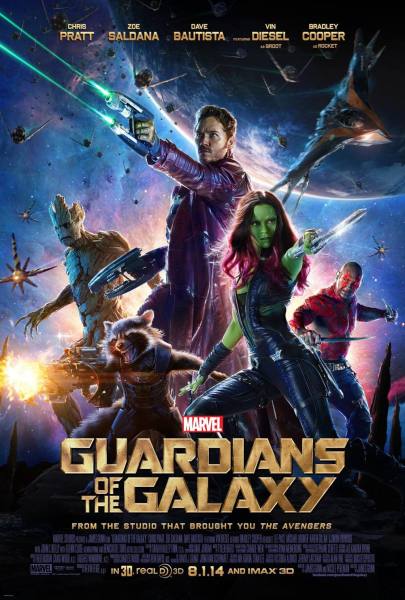 Guardians of the Galaxy had a lot of hype leading up to it. Chris Pratt is an extremely nice, funny guy who kills it as Andy on Parks and Recreation, but there was concern about how he’d do as a lead in a Marvel film. The good news is, that this isn’t a typical Marvel film. (In certain regards.) It’s has a witty comedic undertone that Iron Man tries to have, but has to pull away from because he is the central Avenger. Guardians is filled with losers from the galaxy who will never really save Earth. In fact, aside from the opening scene, Earth isn’t really mentioned all that much.

Pratt does an amazing job on his own, and if one thing lacks, it’s the emotional backgrounds given to the characters, including his leading Peter Quill. We’re told, but barely showed, why we should care about these losers becoming winners. A few loved ones died and a raccoon was genetically modified. It takes it away from being a great film, but your average viewer who is in it for graphics and action won’t notice, or care if they do notice.

What Guardians does right is that it doesn’t try to fit into the Marvel Cinematic Universe too much. It is its own entity that feels more like Star Wars than it does Avengers. It’s a ragtag bunch of aliens trying to do some good in outer space. It doesn’t even feel like Thor, which has become problematic because the Norse god is involved heavily with humans. It definitely is splitting hairs calling this a space opera and not a superhero film, but that’s what it is.

What works in the film is especially the interaction between the group. It helps carry the film when plot holes pop up (like why doesn’t Groot come help Drax at one point midway through the film?). One of the highlights of the film centers on a prison break where the quartet show off all of their skills. It is a turning point in the film that really showcases how the group can work together.

If you’re a diehard Marvel film fan, this one will jump to the top of your favorites list. If you’re wishy-washy about superhero films, this one should definitely be a good one for you to try and like them again.