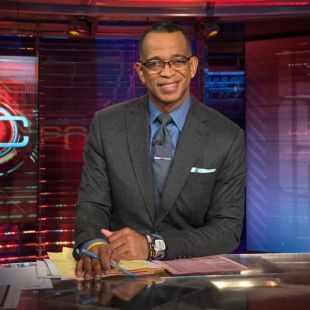 There is a lot to be said about the late, great Stuart Scott. The admiration that fellow sports journalists, athletes, and even President Obama had for him have been pouring out since Scott died on January 4, 2015 after his third battle with cancer. He first appeared on ESPN in 1993, when I was only four years old, so I obviously don’t remember his entire career. I’m not equipped to talk about how, as a black man, he broke down barriers that still existed in the early-nineties. You can read about his success in so many places.

I want to take a brief moment to talk about what Mr. Scott meant to me. As a school athlete in the early-2000s, I craved SportsCenter to keep me in the loop. Admittedly, I didn’t find some of the great sportscasters great yet. They were boring, somewhat old, white guys who wrote brilliantly, but that brilliance didn’t seep into me as a teenager. I wanted something more, and that something wore was Mr. Scott.

He became the epitome of ESPN for me. His SportsCenter hosting and reporting was what I wanted all other reporters to be. Whether it was Scott shouting “boo-yah” over a clip of a homer being or exclaiming that we should call a player “butter, because he is on a roll” when a quarterback didn’t miss a pass during a quarter. These catchphrases were more than catchphrases. They made me realize that journalism could be fun.

Combining a lot of other factors which included Stuart Scott, I started to realize that I wanted to do something with writing. I began watching ESPN for more than SportsCenter. I began listening to what these people were saying about highlights instead of watching the clips. It was ear-opening to say the least.

Through the years Mr. Scott did so much more than report on sports. He was a good man and a good father. I followed him on twitter, not because of his comments on sports, but his views on life. He was always positive, even through three bouts with cancer.

Here is a lengthy and beautifully written piece about Stuart Scott that ESPN released. It comes with a terrific 15 minute tribute video that is also a must watch. Please read/watch more about this man. He was truly an inspiration.