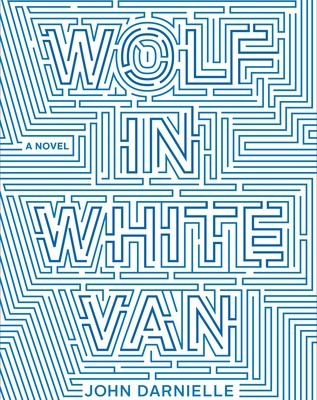 “You either move forward or you die.”

This is a sentiment divulged to the reader by Sean, the narrator in Wolf in White Van by John Darnielle. It’s a peculiar sentence in the sense that Sean neither moves forward or dies in this novel.

No, instead Darnielle chooses to play with time in the sense that the narration mostly moves backwards. There are two main stories that Sean is telling. One is that he is being sued because of something two teens did as a result of the game that they played that Sean created, and the second is about what happened to Sean himself.

Years ago Sean became disfigured by what is first called an accident, but it is so much more than that. We trace backwards until we learn more and more about his life. Darnielle’s prose is beautiful and enticing. His revelations come without warning. The subtlety to such important information is almost an afterthought. The narration unfolds in a such a fluid way. That is to say it goes backwards, but sideways, and forwards, and any which way. Chapters may be about his time in the hospital, but then they’re about players of his game.

So what is his game? It’s a choose-your-own-adventure game. Sort of like role playing message board games – if any of you even knows what that means. You sign up for a subscription and Sean mails you an opening narration. You have to choose from his preselected choices and the game goes from there. It’s like World of Warcraft, but instead of graphics and action, it’s pen and paper. The game is called Trace Italian, named after a type of fort, and it is a post-apocalyptic journey. Players are thrust into this world and their goal is to get across America to Kansas where the last remaining safe haven is.

There are two teenagers who thought the game was real. They venture off and their actions effect Sean.

Now, I know that was a lot of recap, but it is important. I really wish Darnielle spent more time on Lance and Carrie’s story. It never truly unfolds, but enough information is given. As much as it pertains to Sean, and, after all, this is Sean’s story. Piece by piece everything is revealed, but not too much. Over and over we get just enough information to remain interested, but it truly is up to the reader to infer and connect the dots.

That is one thing the book does so well. It allows our minds to be apart of the story. There is very little description of what things look like, but it is so vivid. The world is so fluid that a reader can truly become apart of it because it is almost a blank canvas.

Wolf in White Van is peculiar. That’s the best single word to describe it. But that peculiarity is why it is worth reading.