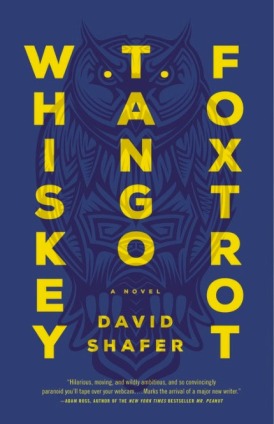 David Shafer’s Whiskey Tango Foxtrot is a techno thriller that will eventually be made into a Jason Bourne type film. Don’t think of the novel as Lee Child or Vince Flynn. This is a literary thriller; it’s not beautiful language, but it is descriptive and creative. It reads like you don’t expect it to, and it takes a while for it to develop.

It is three different stories for the majority of the novel. First there’s Leila. She’s the heart of the story. She works for a non-profit in Burma. She’s trying to do… something. It honestly doesn’t matter. It seems like it does, but once you realize that it’s all trying to be is character development. We are supposed to care about Leila. It’s a valiant effort, but, in all honest, the opening is the hardest to get through. That is until she sees something she’s not supposed too. Like any good action thriller, the story picks up pace from there.

Then there is Leo. He’s a son of rich parents and is now a slacker stoner. He thinks there is some group of people out there trying to take over the world. He’s sent to a rehab clinic for booze and pot. It seems completely disjointed from the novel. These early Leo chapters are interesting though. It’s some of Shafer’s best development and best writing.

Finally, we meet Mark. I hate Mark. I don’t like his character. I’m not sure if that’s intentionally done by the author, or if it’s just my preference. Mark knew Leo in college, now that they’re in their thirties, they haven’t talked in forever. Mark is a self-help guru, but didn’t intend to be. He’s wrapped up with some shady publishers who are more than meets the eye.

Eventually they all intersect. It’s supposed to happen quicker than it does. There are sprinkles of the trio linking up throughout the novel, but I was surprised by how they finally did and how anti-climactic it was. I thought action would pick up, but it was murky at best. I think readers will assume its action packed and thrilling just because they are supposed to feel that way.

I just felt like the plot limped its way to that point that it felt more like relief than excitement once all of the plots intersected.

If we weren’t promised a thriller with all three plots coming together by plot synopses and reviews, then it would have been a pleasant surprise by how it ended. Instead, it doesn’t live up to certain hype. That’s not to say the novel is bad. If you go into not expecting a lot of action, but do expect a lot of development and intellectual warfare, then I think you would like this just a little bit better.