Michael Bible is an emerging American writer hellbent on stripping away the nonessentials of fiction. His provocative novella, Sophia explores an ambiguously spiritual reverend named Maloney. Throughout Sophia, Maloney and his best friend Eli flee the religious South they call home as they drink gallons of gin and have sexual fantasies about the Holy Ghost.

Bible’s jagged thoughts flow together to produce a dark comedy that will make readers think hard about the sins in the world around them. 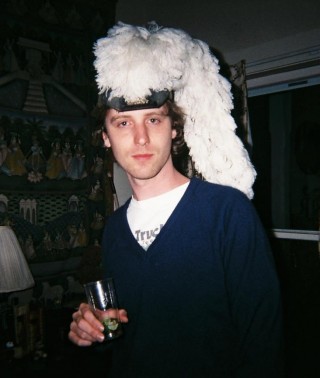 Your style is pretty bare bones. It’s almost as if they are fluid, yet fragmented, thoughts at times. How did you come to find this style as your niche?

I just have a general philosophy of reduction and the economy of language. I think that “less is more” is kind of a great philosophy. Generally of all things. I think of a page as a white space. The sheet is kind of like a curtain to play on. You can play in it; jump in time and space. You can kind of go anywhere you want. I like writers like David Markson, and the later books by Samuel Beckett. Even stuff like Li Po. Poets like that. They work in that mode. A strip down kind of mode that will allow you to move around and let you go anywhere you want. Maybe that’s how I landed on it. Generally, I like short books. I like high velocity short novels.

If you like to strip your work down, how do you decide what’s vital for readers?

It’s just the stuff that resonates as much as I can get it to. The best lines that have the right rhythm to it. If it seems unnecessary to what I’m after, I just leave it out. I try to strip away the extraneous stuff to just use the smallest strips I can to build the building. Just the brick and the mortar kind of thing. Just building up a wall and stripping it away, then building it back up again.

I like that idea of stripping away the excess. I’m always interested in authors use or lack of use of quotations. I noticed that Sophia has very little punctuation even.

I think if you could make semantic sense with language, you don’t need punctuation. There are how many writers who have taught us that? If you’re working in fiction then things like punctuation or syntax are part of the palette. To me, quotations are something that you can do away with. I want to get them away. It’s something about reducing as much ink as you can on the page. If you can get commas, dashes, or any of that stuff out and it still makes semantics sense, all the better. I think there’s a dial of this stuff. You can turn it way up like e.e. cummings. On the other end you have journalism that’s cluttered with all of that stuff. I think you have to fine tune the dial. Like Cormac McCarthy keeps it pretty clean. Margaret Atwood uses whatever. I tend to go with the cleaner writers. I like those who keep it as clean as possible.

If we can understand there is dialogue by what is being said, then all the better. I would even take it a step further. I don’t think adjectives and adverbs are all that important. I try to strip away all of the stuff. Just get back to hard nouns and hard verbs. Really start at the beginning with the equation of the sentence. I liked to diagram sentences as a kid. I liked to reduce language to verbal.

That’s a long answer to a short question.

It’s funny. I teach high school students, and when I do I tell them to make sure these commas are in the right place or the sentence is fluid. It almost stifled their creativity.

It’s interesting to hear. It fascinates me. Do you diagram sentences?

No. I actually teach at the high school I went to. I graduated about a decade ago, and we used to diagram sentences all of the time, but none of my department does any more.

I think there is a lost art of sentence diagrammers out there. I love stuff like that. I think on a grammatical level that economy of language is important. [William] Strunk and [E.B.] White [authors of The Elements of Style] have those laws of grammar in order to give clarity. My favorite thing in there is something to the effect of how people always said don’t end a sentence in a preposition. Yet time sort of softened that up. Realizing that language has a fluidity to it, and how it is dependent on a culture. They really do preach at the end of the day what is the shortest and most elegant way writers can get their point across to another person. That’s the most important thing to me as a creative writer.

So shifting toward your novella Sophia. It has a lot of religion in it. Is that something that creeps its way into all of you works?

I mean I was raised in a very hyper-religious household. It’s definitely something that has interested me for a long time. It was sort of always around. I didn’t have a choice. I went to church every Sunday. I went to a boarding school that was very religious. I wouldn’t call myself a believer. Maybe at certain times in my life, but I was always very skeptical about it even though it was always around. When I was writing this, it just seemed natural for this character to deal with. I originally thought of the main character as someone that was less inclined to faith, and more just questioning the world. At some point in the process he found faith in a ridiculous and off-kilter kind of way. As unbelieving as his faith is is kind of a contradiction.

Also, my last name is Bible so there’s an irony that I haven’t really thought out with the book. It’s just one of those funny coincidence kind of things.

You’ve written written two books on small presses. Do you feel like you get more freedom at a small press?

I really love the small press community. Things are fantastic. I think there are a lot of great books that get published on small press that wouldn’t have a chance otherwise. They get a lot of great attention. It’s just a labor of love for [those in the community]. I’ve had a really great time publishing with them. There are opportunities that a lot of people can’t get on commercial press. I mean, I don’t have anything against commercial press either, but I think there is a different spirit and more you can do on a small press.

You mentioned having different opportunities to experiment. Other than breaking down language, what do you like to experiment with while you’re writing.

I really like to experience with the physical act of writing. Where I’m doing it, the environment around me. How I’m doing it. Things like that. My state of mind and my conscious flow of thought is something I’m really interested in. I meditate a lot before or after I write. I’ve tried different sleeping patters: waking up in the middle of the night or waking up really early. Writing then or late at night. Our minds are very powerful weird things. If we can bend them into different states and try and produce something in those states, that interests me. It’s a quasi-scientific sort of way that interests me.

That would be a very literal experiment. I’m really fascinated by things that take the author out of the equation as well.

Right now I’m working on a book of poems. I got really inspired by Bob Scott who painted a lot in California. It’s crazy how a painting could influence me so much. He had so much going on, there is so much stimuli.

Now I’m trying to get distracted. Having a movie on, people talking in the room, anything. Let whatever comes into the text stay. It’s an experiment to see what I can generate out of the ether. I try and do different things for different project.

What did you experiment while writing Sophia?

Sophia was written at various times. The main chunk of it came when I was still living in Mississippi, and I was working at a bookstore there. I had to be at work at 9:00am. Actually, I was the night manager there, and that was the genius thing. I went into work at 5:00pm. I’d get off work late, then I could go hang out and party with friends, because I could sleep all day. What happened was the manager told me I was going to work mornings. I didn’t know what was going to happen because I would write during the day. So I had to discipline myself to get up and write. I quit going out and I would wake up at 6:00am and went to this little bakery and wrote. I went to work and wrote during my lunch break, then I wrote when I got home. That was about nine months. It was the initial draft of what became Sophia.

What is a typical Michael Bible day look like then?

Well, I can give you my perfect “New York day.” I edit for a few places, I write for places, but right now I just finished a manuscript which is sort of a prequel to Sophia. I also have a sequel to Sophia, which are going to be these end caps to the trilogy. I’m sort of in between the two.

I typically… I don’t know. I don’t think I ever have a typical day. I just try to wake up and get out into the world for a little bit. Then I work when I can. I work in the mornings a lot, but I go to the Metropolitan Museum of Art a lot. It’s sort of my cathedral nowadays.

Thanks for taking the time. I’ll let you get back to your typically atypical day.