Confession: the only season of Girls I watched as it aired was the first season and I really didn’t enjoy it at the time. While everyone praised the show, I thought it was lackluster. My sister told me I didn’t understand it because I wasn’t a girl. She claimed that the show really captured what it was like to be alive in your twenties and a female.

That’s probably true. I didn’t understand the subtle nuances that the show depicted. 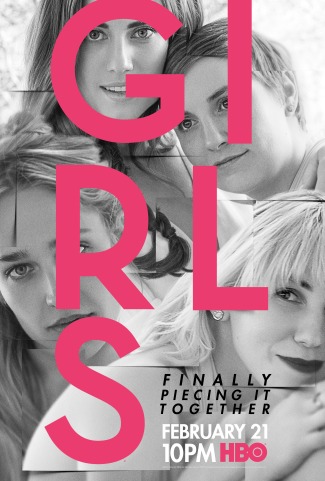 At the time, I hated all of the girls. I really only liked the guys, who were cast into secondary roles. I tried to give the second season a shot when it aired, but even Donald Glover couldn’t keep me interested. I put the series on the back burner for a long time until my sister turned on the most recent season premiere. I watched it and was blown away annoying Marnie was getting married and Adam (the best character) wasn’t with Hannah but was with Jessa.

I had to know how we got there. I immediately binged the show. It’s clear Lena Dunham had a vision, but it faltered from time to time. Season four was awful. The critics were right. I don’t really know what happened that season. Everything about the Iowa plot line bothered me. Hannah’s teaching arc was rocky at best until she met Fran.

Then this season came along and blew me away. Each episode served as a beautiful time capsule of each of the characters’ life in a very specific moment. The first half of the season wad good. Shosh in Japan was cute, but the show clearly doesn’t know what to do with her.

The show’s surprisingly strongest arc this season was Marnie’s marriage and (spoiler) break up with Desi. Obviously “The Panic in Central Park” was the best episode of the season and maybe even the whole series. Even if you don’t know what the show is about, you can probably just watch this as a short film and piece together who the characters are. It was a half hour of top notch story, acting, and directing. Please, please, please go watch it right now.

Because I’m a guy, I have to say that Adam, Ray, and Elijah were all strong stand outs this season. Adam has become one of the best characters on television. He’s so odd that he is extremely relatable. Ray, on the other hand, is the sweet soul of the group. He’s that old guy who hangs out with young, hip kids that nobody wants to become but we (read: I) have become and need to learn how to be okay with life passing me by. Elijah just reminds me of so many of my best gay friends that I love so much. I’m glad the actor landed a show that got cancelled so he could be a bigger part of this.

I know I need to stop gushing about the guys on Girls, but I will say this. I used to hate all of the main girls, but now I need to know where their lives go. I think this fifth season was one of the most elevated seasons of recent memory. It takes that artsy independent film vibe and shoves it into twenty or so minutes every week.

Next season has a chance to end a show on the highest of notes thanks to this season’s upswing. I’m glad I came back to the show at the right time. If you gave up on it like me, go back to it. You won’t be disappointed.