Scene: August 2016, I was single, hair thinning, and my doctor told me I was overweight. I was completely bummed out.

Spoiler alert: I’m still single, my hair could still use a little Rogaine, and I may have lost some weight. But I’m not bummed anymore.

Nothing much else has changed. I have a dead-end, but rewarding, job with the state government. I live in the same suburban apartment. I go see bands play at my favorite venues. My favorite drink remains a bourbon and soda with a lime. What’s changed?

I play in an adult kickball league every Tuesday. 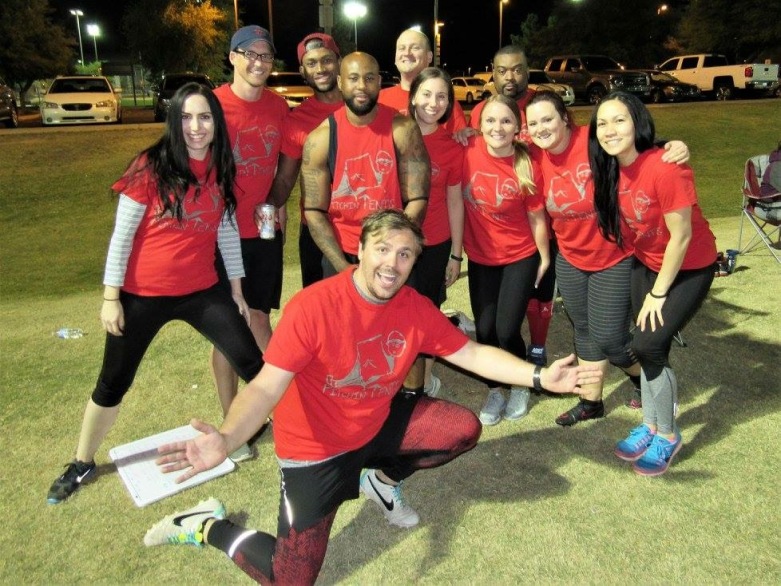 It’s a recreational league that involves drinking beer, doing Jell-O shots, and a Slip-n-Slide that leads to home plate. One of my longest tenured friends mentioned he wanted to play sports again. We both used to be athletic. I played varsity-level sports in high school and played a handful of more as a child. I’m talking year-round baseball, basketball, volleyball, and soccer. I wasn’t an amazing athlete, but I could hold my own.

I missed that. The competitiveness. The sweating. The agony of defeat. The thrill of victory.

I got a call from Roo (real nickname, not birth name) on a Tuesday in August asking what I was doing at 7:30. His brother convinced him to join a team with his sister and her boyfriend. Did I want in?

I show up in short shorts and a cotton tee. I don’t even have workout gear and my Nikes had a hole in it. I had been so depressed and out of shape that I didn’t even have the energy to walk on a treadmill. I eventually got placed on a team of “free agents” – which is a term the league uses from single players or pockets of two or three friends who don’t have a team.

There was a dozen of us. Four of us still play together on a different team five seasons later (each season runs for two months). Roo and I are still good friends (he doesn’t play anymore). A random girl from Michigan named Ally has become one of my best friends. There’s a guy named Muff who couldn’t be more different than me but we are close enough to get brunch.

The point is: I found happiness. In the wild without an app. I go out for three hours a week, play two games of kickball, and watch another game. I “take it too seriously” according to teammates. But in a fun way. I don’t yell like I would have on the high school volleyball court. I still coach still, but my friends have told me it’s not mansplaining like other guys do.

I wear bright white cleats (I’m not the only cleat wearer, I swear!), women’s leggings with floral and crazy patterns, and I sweaty athletic top.

What’s funny is that I drink less now. I’ll have a Jell-O shot every now and then or maybe a can of beer. But I take my role as lead-off kicker and shortstop very seriously; even if no one else does.

I’m still sore and out of shape, but the soreness is refreshing. I don’t go to the gym and a health screening at work still reminded me I need to lose weight. As much as I complain about that, I complain a lot less about a lot of topics. My coworkers have told me as much.

It’s nice to think that a childhood game that no one took seriously, that no coach ever existed for because it wasn’t a varsity sport in high school, is the best decision I made in my twenties.

I’ve made some terrific memories, met some amazing friends, and found something to channel my energy into. I have something to look forward to every week. I see friends on social media still complaining they’re bored and have nothing to do.

Not me. I have kickball.

Even if a weekend is filled with lounging around and I have a dreaded work week ahead of me, I know I have Tuesday night kickball. Maybe the bar after for free team nachos. Maybe frozen yogurt with my close friends who happen to be teammates.