This year has been sweet to my ears. My favorite musician Richard Edwards released his first official solo album. Then he released a stripped down LP of some newer and older songs. Now, Now released two songs after a five-year hiatus. Lorde, Alvvays, and Haim put out their highly anticipated sophomore efforts. Then there were albums that crushed my soul like Mount Eerie and Phoebe Bridgers albums. Selecting ten was difficult but I tried. I added five EPs to the mix as well. Because I wanted this to encapsulate all of my favorite aural candies, I threw in five podcasts. I could have suggested dozens, but am trying to control myself.

Here are ten albums that I’ve been recommending. In alphabetical order. In tweet-ish length blurbs. 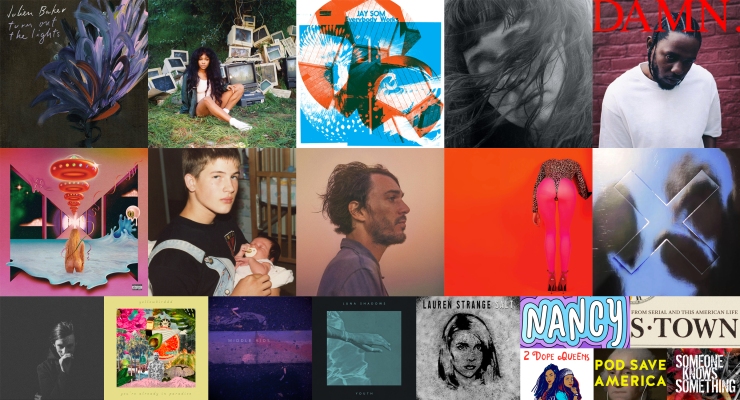 This feels like a smaller, concise sister album to Car Seat Headrest’s debut. Fuzzy, emotional, punchy. Like all great writers, Adrianne Lenker brings us into her darkest and most intimate moments. She lets us linger there in silence before shaking us awake.

This as intimate as one can get. Melina Duterte recorded it in her bedroom studio. She wrote perhaps my favorite song of the year (the infectious “The Bus Song”) and produced such sweet lo-fi tones that rise to noise rock levels.

Turn Out the Lights – Julien Baker

This sophomore release didn’t go overboard with anything. Baker upped the ante on production, gut-wrenching lyrics, and added instrumentation to the bare-bones vocals and guitars that made her first album so special which resulted in a  fresh, but familiar set of songs for fans of the singer-songwriter.

It feels like there are a lot of gimmicks in rap right now. Lamar isn’t one of them. This album is raw and rapid. It’s bouncy and fun, but also provides the expected social commentary he’s known to produce. This caps a trifecta of albums for him that are all stunners.

There was a time when I jokingly liked Ke$ha. Now, I sincerely love Kesha. “Rainbow” is one of the most beautiful songs of the year and that’s all I’ll say. She deserves to let the music speak for her.

Annie Clark lets synths and drum machines take over here and proves she can produce magnificent after party dance hits.

Her soulful vocals fluctuate between a cozy whisper to a robust belting that rivals any R&B singer. She doesn’t rely on cliche hooks and melodies; instead, she offers an alternative to the typical Top 40 jams.

I’ve written more about the former Margot and the Nuclear So and So’s frontman than any musician. His songs have more imagery and detail than some short stories. This album isn’t as wide-ranging as some works, but is a great album to find yourself with.

Out in the Storm – Waxahatchee

Katie Crutchfield’s album is the type of album you want to have a beer with at a party, but it’s also one where you want to lay curled up in a ball with exploring the emotional dumpster fire your life is. She doesn’t just need ballads to hit us it hurts. She lets us have fun while telling us how her heart was torn out.

Most of my rock sensibilities or softer acoustic affairs. This album is anything but. It’s fun. F.U.N. The electronic undertones will sweep you off your feet.

And now for some short and sweet releases.

Three songs of pop rock perfection. Strange doesn’t play games. She just writes infectious melodies and every instrument knows exactly what to do and when to do it.

Dreamy. Synthy. Dancey. There’s a lot happening in these four songs. But pay attention to how breathtaking her voice is.

Everything I said about Big Thief/Jay Som/Waxahatchee above is relevant here. Imagine what these Aussie’s are going to do with a full length

Adam McIlwee was Tigers Jaw. Then he wasn’t. Here he drops his gothic rap in favor of three raw songs with just his voice and guitar.

Liam McCormack’s coffee shop acoustic melodies found a synth and the Bostonian in Los Angeles produces his sunniest set of songs yet.

Here are five podcasts for you if you somehow hate music but still need some aural stimulation.

Social commentary and comedy go hand in hand. The two dope goddesses are better than Stewart and Colbert. Yeah, I said it.

The most sincere discussions of LGBTQ topics happen here. For gay/straight/whatever listeners.

A slew of liberal podcasts that are the answer to Conservative talk radio. Welcome to the bias.

Don’t go into it expecting a murder mystery. It’s an exploration of the rural south.

The third season of this true crime/cold case series continues to produce the best material in the post-Serial void.